Leash Or No Leash; That Is The Question 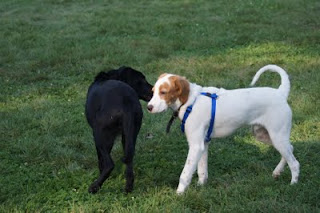 I have now discovered dog parks. I had tried to introduce Comet to off-leash dog parks but she would have nothing to do with them. Very shy, one-friend-at-a-time dog, it was not for her. Bandit on the other hand can't get enough of them. We have been frequenting the airport off-leash one which is quite alot of acreage. The noise from the airplanes going overhead just about deafens us but it doesn't really bother me considering I see it as job security of a sort.
Doing a little research I wandered on to a truth vs myth site in regard to the parks. They say that it's a nice place to meet other dog owners since most return now and then. I also wondered about whether fights break out, etc. but they say that fighting is usually about teritorial rights and since everyone is "leash-less" there is no territory to protect. They are all equal and seem to work out the dominance roll pretty well. Bandit hasn't seen any other dogs that wanted a fight except a bassett hound named Goliath and he was old and wanted nothing to do with the shenanagans of a six-month old goofball like Bandit. Lots of fun was had by all, at least by the
dogs. The knats have fun with us. 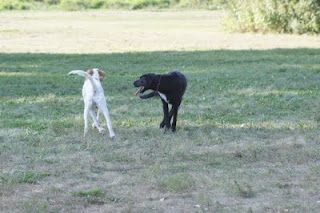 Back in my January 28th post of this year I featured my twin cousins. I spent this past Labor Day holiday visiting Judy. We hadn't seen each other for quite some time, approximately 12 years. We obviously had alot of catching up to do. Some of it was difficult to grasp since our views were clouded by time and mis-information given to me by her father and mine. Now that both are deceased we were able to hash through some of the events surrounding the later years of our their lives. Through this process I have come to the conclusion that much of my childhood was spent in complete and total isolation to the sins of my parents, esp. my dad. He wasn't a bad guy but in truth gave me information that was pretty sugar-coated. With that information I grew up seeing only the charitable attributes of my father and his brother. The labor day holiday changed much of that. I'm not sorry I know the truth but I have to admit it kind of changes my perspective about them both. In some respects I don't really care because they are both gone and nothing is accomplished by talking about what was said or done and who said or did it. I was able to at least let her know the care and love I have for her as my cousin and that I would always be there for her if she needed me. I hope to visit again some day soon.
Posted by Unknown at 11:23 AM No comments:

Email ThisBlogThis!Share to TwitterShare to FacebookShare to Pinterest
Posted by Unknown at 11:17 AM No comments: