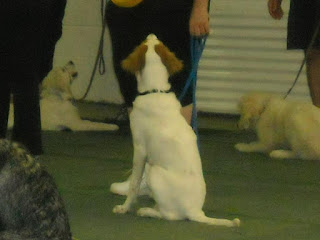 Karen came with me to obedience training class and shared some photos with me so I decided to add a very short segment on the blogsite. Bandit is doing well. Me, not so much. It is hard when you first start out because the dogs don't get the first thing you are trying to teach them but they say that eventually it clicks. So far his attention span is great which is one of the most important parts. They have to "check in" with you at all times. The teachers are great and there is homework every week. Essentially they teach you how to teach your dog to be obedient to you, to make him believe that you are the "top dog". He knows signs for sit and down and some heeling with turns. We started out with clicker training but I don't like it because it's one more thing you have to remember to do and it's all about timing. The only problem now is he goes down when I say "stay" so we are working on that. Don't know why, though. I plan to move into Obedience II and then possibly agility training where they jump through hopes and stuff. Everyone tells me he would be great at it. Right now he can catch balls in the air so I'm hoping to move into using a frisbee at some point and at the airport dog park he gets so worked up and running so fast that he sometimes will jump over other dogs in all the excitement.
**As a side line from my last post, Allina was able to collect close to 3500 bikes for donations at Christmas. Yes, Virginia, there is such a thing as Minnesota nice.
Posted by Unknown at 9:24 PM 1 comment: 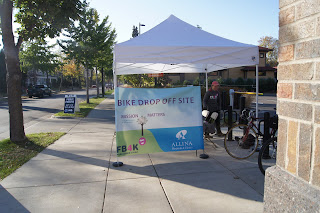 When I started my job with Allina I found out that they offer a number of volunteer opportunities. I picked one that is right up my alley since I bike to work and enjoy biking. My first volunteer opportunity came this past Saturday for the Allina/FB4K Community bike Collection Day. We held a collection day at each of the Allina clinics and people donated old and new bicycles, volunteers fix them up and refurbish them and then they are given out to kids in need at Christmas. It's a win-win for all. 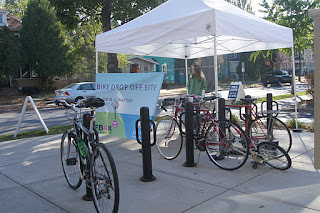 I had a wonderful time getting to know some other people in the Allina network, I logged some volunteer hours that will be matched by Allina to go toward my favorite charity at some point and the end result of all of it will be making a difference in thousands of children's lives. So if you have a bike gathering dust in your garage or basement there is still time to donate. Just go to Freebikes4kidz.com. All bikes are accepted, regardless of condition and it is tax deductable. 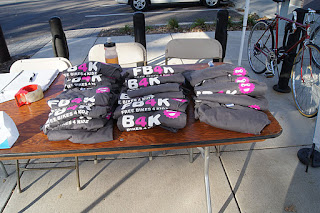 Took a weekend away with Michael down to the homecoming at Platteville, Wisc. Michael is on the alumni committee and enjoys his involvement with his university. Karen decided to take the weekend and join us which was a rare treat. We took in the sites, farmer's markets, and festivals along the way as well as enjoying the wonderful weather. probably packed too much into the weekend but with my new job I don't have clearance for vacation time until next September. We managed to have alot of fun despite the fact that I know the route and stops by heart.
Posted by Unknown at 11:06 AM No comments:

Maple trees? I don't think so 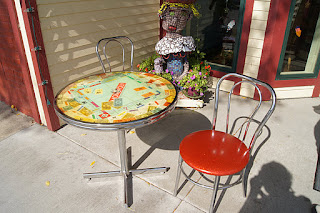 Sorry for taking so much time away from my blogging. I had a broken index finger and keyboarding is next to impossible. Praise God for the Gentle Leader people. I now can walk my dog in "calm" mode. Hopefully you all are hanging in there for friendship sake. I finally have something to blog about and it's not about the puppy for once. Michael came to me last night and said he wanted to take a day trip to enjoy the colors and buy his usual supply of raspberries that he gets at a stand just outside of Clearwater, Wisconsin. We headed out this morning (Saturday) bright and early and headed down the Wisconsin side going through Wabasha, Red Wing, Winona, and various other places and heading back the other way. Don't tell Michael but to me these trips are "yawners" and full of old retired geezers eating ice cream cones and stopping for the festivals and farmers markets, ending up having a meatball dinner at the local church in some little town along the way. One has to admit if you've seen one maple tree you've seen them all. I can hear all my Christian friends saying, "but Christine, the maple trees are like the snowflakes. Every one is different and unique". I agree but when I have my camera I tend to take pictures of things you would never see in the ordinary day at any time of the year. If you have seen some of my pics from past posts you know my style. Anyway I was again successful! Enjoy or say, "she's at it again". 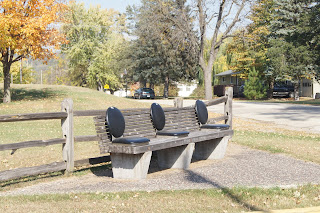