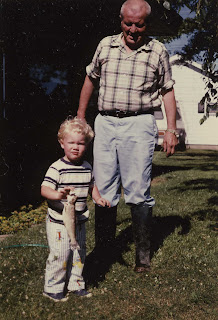 My title is from "Three Little Fishies" by Kay Keyser and His Orchestra from 1941. Most of you over 50 remember the song. It was a jukebox favorite and sold over a million copies. Don't know why but David has turned out to be a very good fisherman. The only person that ever fished with him was Grandpa Myron (the man in the picture) so we're giving him credit. We did take him fishing at the Dells when he was about 10yrs old (starving fish, lots of worms and 10 bucks a lb for whatever you caught) but you really couldn't call it real fishing, obviously. David recently went "real fishing" to a place called Spider Lake up in Grand Rapids in the Chippawa National Forest and caught a 43" Shoepack Musky. Even though it was trophy-worthy he had to throw it back for another catch on another day because the lake is on a reserve. Too bad. Grandpa would have been so proud! 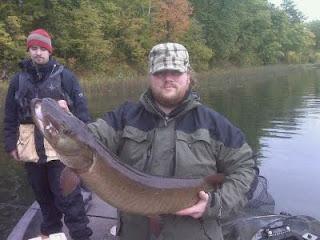 Posted by Unknown at 6:37 PM No comments: