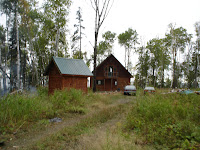 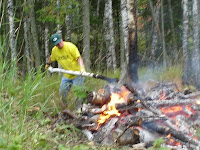 This past weekend Michael and I went up to a rustic area around Bayfield, Wisconsin to visit a long-time friend at her cabin. We stayed overnight in Hayward and enjoyed sightseeing, etc. and met her up at her cabin on Saturday early afternoon. She invited us up to burn timber that had fallen during a recent storm. Her cabin sits back from Lake Superior shoreline and she owns approximately 2 acres of what normally would be fairly uninhabitable land even though beautiful. The cabin is still in process of being finished with no running water nor heat. she has distant neighbors on either side. We spent the afternoon burning off timber. she took us on a mini-tour of her land and told us that she has seen bears as well as wolves and deer that roam free in the area. We spent the evening playing cards and enjoying conversation over hot beverages. Her two dachshunds, Kurby and Kaylee joined us in front of the fireplace which helped warm the cabin for the night. We had a wonderful time and hope to return again to be a "guest" of natures own. The two pictures (I'm still learning how to place them so bear with me) are of her cabin and Michael hard at work mixing the logs together in the fire.
Posted by Unknown at 9:13 PM No comments:

Fun in the Sun

Those of you that know us know that our favorite pastime as a couple is biking. We go almost every weekend, going over a bike map, picking a trail somewhere in the Twin cities area and hit the road. Last weekend we went with another die-hard biking couple and headed to Medicine Lake area via car. From there we covered approximately 13 miles of beautiful lake front homes (I'm sure my doctor lives in one of them) and ended up at French Park. We usually bring snacks to share and rest up abit and head back. We had a great time. Included, as usual, is a picture our friend took of the two of us enjoying the day together. Life's a beach! (actually it's behind us).
Posted by Unknown at 3:07 PM No comments:

Grease is not just a movie title 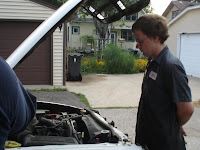 When I decided to "retire" from cleaning homes, a business I had for approx. 17 years, my father was against it. Being in business for himself was something he always took pride in so hearing that I wanted to go into a job where I got paid less than half what I made cleaning homes he felt was a big mistake, not to mention that I would have to get up every morning and buck the traffic like the rest of the world working for someone else. I explained to him that I was willing to buck the traffic and get paid less for what I had a passion for which was to make a difference in the lives of other people in a more personal way. All the negative reasons for "retiring" were facing me, but I have always had an interest in working in the healthcare industry. so when Daniel came to us after high school and announced he wanted to be an auto mechanic, I was against it. After all we had given him a wonderful education that included 7 years of private schooling which we felt would set him up for true success. We figured he would go into engineering like his dad since math was his best subject. However it was his decision and after 2 years I have decided that maybe he was right. Even though he may never be the book learner I would have liked, he is truly gifted at his mostly hands-on work with cars. He also went out and got hired at the place we have our cars serviced and has learned an enormous amount along with tons of experience working on different makes and models. He comes home greasy, dirty, and tired but he truly is a natural at it. The picture I chose is the day that his older brother David came over to have Daniel help him fix his truck. I am thankful that I have been able to see the fruit of allowing him to seek out his own desires, something that my father was not able to see as he died before I finished school. Congratulations Daniel for knowing what you truly want in life and going for it!
Posted by Unknown at 8:58 PM No comments: