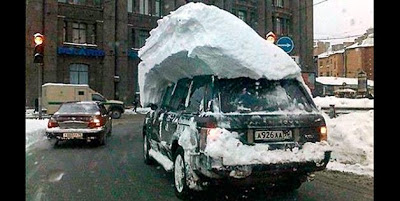 I haven't posted for awhile and I saw something on Xfinity.com that reminded me of something I could post. It was 22 pictures of an example of laziness however in my case I wouldn't call it that.
The first big snowfall this year left our cars covered with snow. I was in a hurry to get to work and after clearing off my car I left and parked in the employee lot along with my co-workers. Some of the girls were kidding around with me about having a "mohawk on my car". I didn't get it at first but then I understood. Most of them live in condos that have indoor garages where they live and I don't have access to mine with a large car and a one-car garage that was built in 1923. Mine usually is the only one with snow on it. It looked similar to the posted picture but not quite as bad. I figure snow weight can help get us through the icey streets even though it probably doesn't help with the gas.
Posted by Unknown at 12:38 PM No comments: 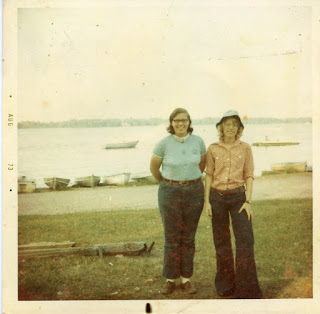 Ran across a picture the other day while cleaning out PILES of stuff and came across a picture from my college days. The year was 1971 and the girl next to me (I'm the one with the hat on) is Diana aka "Tex" because she was born in Texas. We were really close in college. So close that my dad use to call me "Louisiana". We were roommates at the now defunct Golden Valley Lutheran College. We both went on to Augustana in Sioux Falls since I could live with her at her folks house in SF for the 1st year at Augie and save money. Our senior year I moved on campus and we had kind of a falling out due to "life" happening. I became a Christian and she didn't understand that whole "scene" as she called it, I made the cut in the marching band as a drummer and she got cut, and new friends and a focus on the future became more a part of my life not to mention that I wanted to live on campus at least one year to experience dorm life, etc. After that we just lost track of each other. Anyway, our lives moved on until the 30 year reunion at Augie in 2003. She got in touch with me and asked if I was attending and could we meet there and make up for some lost time. I took Karen with me and we met her there. We had a pretty good time. I got to meet her mother whom I hadn't seen since '73, always a sweet unassuming woman, and we attended the football game that day and enjoyed dinner over pizza. I don't know if I had changed too much over the years or she had but it was hard to connect because she said that I wasn't the same person that she expected me to be.  After her mother died two years later in 2005 (her dad died in '78) she went back to Texas,  and now lives with a lovely older lady in Austin working as a clerk for the AARP. She never married. Anyway, since that time we manage to exchange yearly Christmas cards to keep in touch. I never know where she is so I have to wait each year until she sends me one. I pray for her alot since her life hasn't been easy for her. Not alot of money or support from relatives or friends. The card I got this year came yesterday and she said she is moving again. I'll have to wait once more to send her next years card. When I was a Girl Scout we use to sing, "Make new friends but keep the old. One is silver and the other is gold." I try to remember that along with the good times.

Posted by Unknown at 1:57 PM No comments: