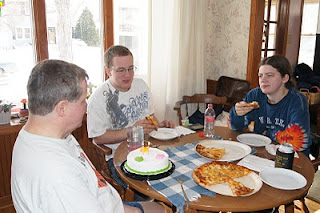 Our family exited 2010 with my birthday and entered 2011 with Michael's. Mine was a non-event since the snowstorm wiped out any chance of the large party but our biking friends braved the weather that night to join Michael and I for pie and Euchre which really helped my mood. Michael's was successful as well in a small but very meaningful way with dinner at Sun*seths and a rousing game of Hand & Foot (they let him win since it was his birthday). They also gave him a Green Bay Packers pillow slip which was a wonderful addition to the evening for him. Then today we finished out the beginning of his 62nd with two of our kids joining us for lunch of pizza from Papa Murphy's along with a card and birthday cake.
I also thought I'd throw in a picture of the two competitive souls in our family playing Scrabble a couple weeks ago. Karen didn't let him win since it wasn't his birthday. 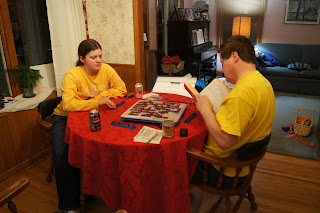